A downloadable game for Windows

Play as this dumb dog Bodi and sniff all the interesting spots in the park on his daily walk.

Be a nuisance all over the place and bark at large dogs.

Go home when you're done and never stop being annoying. It is literally Bodi's World.

SPACE to smell and investigate.

P to poop on the ground. Press and hold O to pee everywhere.

First, if anybody plays this, omg thank you so much for playing our game  :-)

This is the first game we ever made and was more of a test to see what was possible than anything else. Before starting I (Peter) wasn't even sure if we would be able to make an object move across the screen or make a sound happen on cue or scroll across a large playing field, but for the most part things worked out. Maybe next game the goal with be capital eff FUN but at least we got something cute out of it.

Coded using C++ in Visual Studio 2019 with the SFML graphics and audio library.

Music was made using MixCraft 8 and original sounds recorded with an ancient Blue Snowball mic and edited using Audacity.

Some sounds were edited from clips downloaded from freesounds.org, credited below...

Also a major thanks to this Udemy video that helped me get started with making shapes move across the screen with SFML: https://www.udemy.com/course/learn-c-game-development/learn/lecture/103281#overview

Ok, thanks again, love y'all!

Unzip the files and click on the exe file to start. It's listed as "Bodi World Play!"!!!

incredibly fun and relaxing. Bodi's character really shines in this production. the artwork and music is great!

I beat it because I have much talent.

A fun game to play. Makes me laughs a lot. Great the way it is. 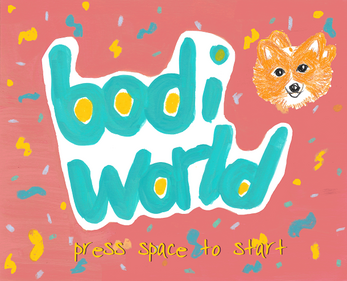